LA Fridays with Bob and Tom: Cathedral of Our Lady of Angels

Week 8: Cathedral of Our Lady of Angels 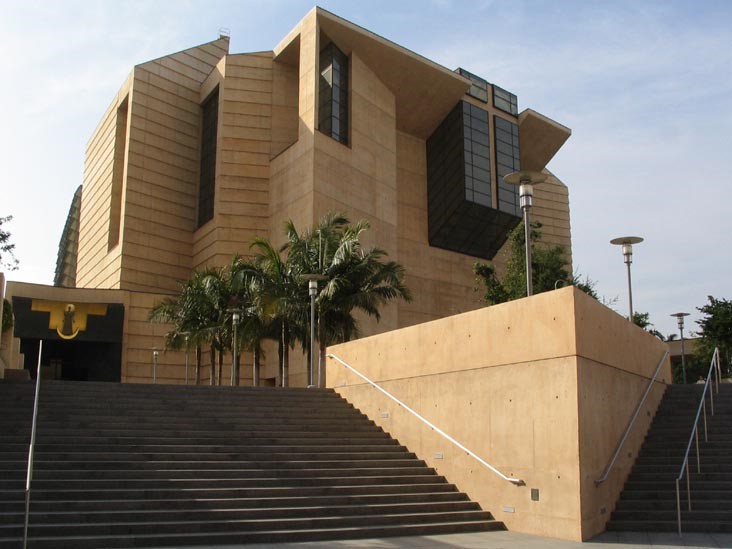 One of the finest cathedrals in the country, the construction of this 11 story Cathedral began May 1999 and was completed by the spring of 2002.  Spanish architect Professor Jose Rafael Moneo designed this contemporary Cathedral with virtually no right angles.  This geometry contributes to its feeling of mystery and its aura of majesty.  The design challenge was to reflect the diversity of all people.  Moneo wanted both a public space and to instill that special feeling people seek when they go to church.  To the architect these two competing interests suggested a series of buffering, intermediating spaces, plazas, staircases, colonnades, and an unorthodox entry.  Worshippers enter on the south side, rather than the center of the Cathedral through a monumental set of bronze doors crowned by a contemporary statute of Our Lady of the Angels.  A fifty foot concrete cross “lantern” adorns the front of the Cathedral.  At night glass-protected alabaster windows are illuminated and can be seen at a far distance.  The Cathedral is built with architectural concrete in a color reminiscent of the sunbaked abode walls of the California Missions and is constructed to last 500 years.  Not an easy feat in earthquake- prone Los Angeles.  The Cathedral features a mausoleum in its lower level.  The Church organ is the 89th largest pipe organ in North American.  We easily spent over an hour inside and outside in this “must see” cathedral.