LA Fridays with Bob and Tom: The Hollywood Museum 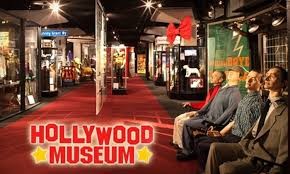 This week we take a trip to the glamour of old Hollywood, visiting the Hollywood Museum, 1600 N. Highland Avenue, in LA.  Originally, the Museum building was the headquarters for Max Factor, the legendary cosmetic icon for the Hollywood stars of yesterday.  Today the building houses a collection of memorabilia from the history of American film and television.

There are three floors of exhibits of movie and TV costumes, props, mockups, and more.  The museum contains a large display of makeup and associated cosmetics used in film and television. The main floor has hundreds of framed photos of various stars, mostly from the period l930s-1950s.  The second floor is all about Marilyn Monroe with some great monsters mixed in, the Predator, Aliens, and more.  Another floor is devoted to Batman.  The creepy basement has ghouls such as Hannibal the Cannibal, Elvira, and others.  All in all we spent a few enjoyable hours returning to the days of old Hollywood.