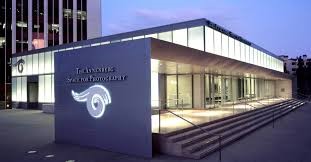 This week we return to the Annenberg Space for Photography, the well-known exhibition apace in Westside Century City, dedicated to displaying photographic works, ranging from artistic to journalistic, using both traditional photographic prints and modern digital techniques.

We viewed the newest arresting exhibition Vanity Fair: Hollywood Calling, curated by the magazine’s creative development editor David Friend and former director of photography Susan White.  The exhibition features photographic portraiture and multimedia installations that capture the magic and glamour of the film and television industry’s major players from the last four decades.  Among the portraits you are sure to recognize your favorite Hollywood star posed and photographed by the most famous Vanity Fair photographers past and present.  If so inclined, you can strike a pose in the Mark Seliger Portrait Studio and send it to your friends.

In the center of the exhibition space is the film area.  A short film introduces the participant photographers commenting on their iconic Vanity Fair cover of Hollywood photographs.

This exhibit is a must for those who enjoy photography and/or film stars.  The exhibit is open Wed.-Sun., is free and discounted validated parking in the building is available.