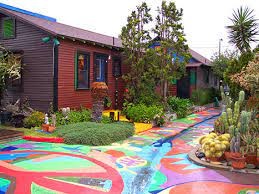 This week our destination is a little-known arts and crafts community, St. Elmo Village, located in mid-city Los Angeles, one block south of Venice Boulevard and two and a half blocks east of La Brea Avenue. Created in the 60’s this is a place of creativity, a mosaic of humanity, a mecca for sharing, teaching and learning, for children and elders, a shelter forging and creating spirits.  St. Elmo Village is an outdoor/indoor gallery featuring art exhibitions on Sunday afternoons.  The Village courtyard is alive and colorful as paintings and other workshop efforts are exhibited. Throughout the year, the Village hosts shows of different guest artists and during summer months, the Village presents live jazz performances and African drumming.  Tom returned on a Saturday morning with his twelve-year-old grandson, Nate, for him to participate in a drawing session from 11:00 to 12:30.  There is adult supervision, the children are not instructed but allowed to draw using their own ingenuity.

We were impressed with the creative atmosphere and friendly assistance provided by the Village inhabitants as we toured their environment.  There is no charge, but donations are greatly appreciated. You will want to include St. Elmo Village on your bucket list as you break free from the confines of Covid isolation.