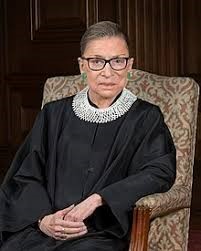 This week we visit the Skirball Cultural Center, 2701 N. Sepulveda Blvd, LA, to view the Notorious RBG: The Life & Times of Ruth Bader Ginsburg. The exhibit is based upon the N.Y.Times bestselling book of the same name, created in partnership with the book’s co-authors Irin Carmon and Shana Knizhnik.

Through archival photographs and documents, contemporary art, media stations, and playful interactives, the exhibition tells the parallel stories of RBG’s remarkable career and the efforts she exerted to expand, “We the People”, to include those long left out of the Constitution’s promises. Woven throughout the exhibition are briefs and other writings by RBG including some of her most famously searing dissents.  Ginsburg’s legal efforts to have the law accept equality between men and women for equal pay, educational opportunity, and control over their own body, reminds me of the legal efforts of Thurgood Marshall on behalf of Afro Americans for equal rights in education and voting rights.  Ginsburg and Marshall, two Supreme Court Justices that give us hope in troubling times.

Bob and I encourage everyone to see the RBG exhibition which runs until March 10th, open from noon to five, with plenty of free parking.