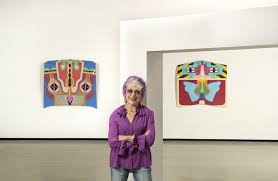 This week we visit the Jeffrey Deitch Gallery to see a full survey of a remarkable body of work, created by Judy Chicago, in Los Angeles and Fresno from 1965-1972.  Judy Chicago (b.1939, Chicago) is an artist, author, feminist, and educator whose career spans over five decades.

The exhibition features a series of paintings, drawings, sculpture, installations, and documentation of Chicago’s environmental and fireworks projects.  During this period of time Los Angeles was, as many areas of the country, inhospitable to women artists.  A clear example was Jackson Pollock’s comment about the paintings of his then friend Lee Krasner, “This is excellent work for a woman artist.”  Chicago, intent on learning more about industrial techniques that were not taught in art school, enrolled in auto body painting school.  She was the only woman out of 250 in her class.  This exhibition includes her first group of works coming out of auto body school, car hoods hung on the walls like paintings with their bold female centric imagery.   The lacquering techniques that she learned in auto body school allowed her to merge color and surface.  The color is infused into the material.  They are quite striking.

Partly in reaction to the challenge of getting her work to be taken seriously, she began her Feminist art project which contributed to changing the course of contemporary art.  In addition to her Lifesavers and Fan paintings, the exhibition includes major sculptures such as Rainbow Pickett, Trinity, and the work 10 Part Cylinders.  There are several videos of Chicago's Women and Smoke, California, 1971-1972 on the back wall of the exhibition for viewing.

The Deitch Gallery always has wonderful exhibitions and we recommend going to view one any time.