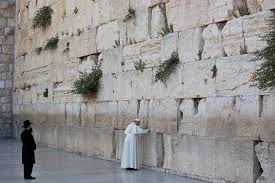 This week we return to the Annenberg Space for Photography to view the unique exhibit “Walls.”  Timely, with Trump’s fixation on building the border wall between Mexico and the U.S. to prevent illegal immigration; "Walls: Defend, Divide, and the Divine," is an historical look at civilization’s relationship with barriers, both real and imagined.  This exhibit explores the various aspects of walls - artistic, social, political, and historical - in six sections: Delineation, Defense, Deterrent, The Divine, Decorations, and The Invisible.  Featuring over seventy artists and photographers, "Walls" invites viewers to contemplate how these structures - from the decorative to the divine - affect the human psyche and why we keep building them.

The Annenberg Space for Photography is an exhibition space in the Century City neighborhood of Los Angeles’s Westside, 2000 Avenue of the Stars, 90067.  Founded in March 2009, it is dedicated to displaying photographic works, ranging from artistic to journalistic, using both traditional photographic prints and modern digital techniques.  Open Wednesday to Sunday, from 11:00am to 6:00pm, admission is free and validated parking in the building is available.

We make it our business to view every new exhibit.