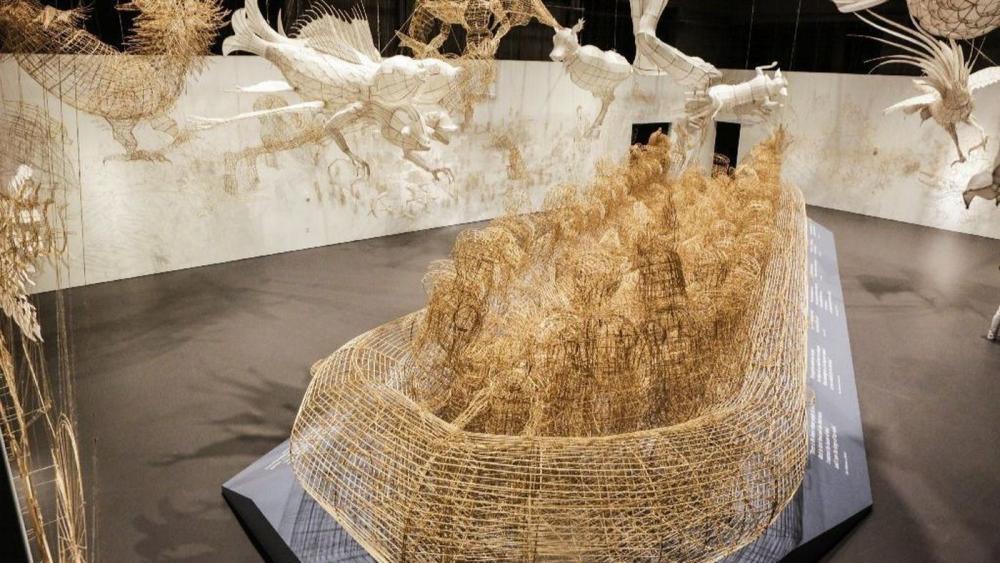 The Jeffrey Deitch exhibition consists of a central space filled by STOOLS (2013), pictured above.  There are 5,929 wooden stools gathered from villages across northern China forming a 72-foot square, creating an enormous variegated surface.  Complementing the stools is a new series of Zodiac works composed from thousands of plastic LEGO bricks.  There are twelve Lego Zodiac animal heads overlaid onto twelve landscapes and monuments which from a distance appear as tapestries rather than Lego designs.

Central to the UTA exhibition is a new collective performance project, HUMANITY (2018), a global campaign reaction to the tens of millions of persons displaced by war, famine and climate crises, and gives a personal and group voice in support of the idea that humanity is one.

The Marciano exhibition, Life Cycle, is the culmination of ten years of effort, featuring works related to the artist’s diverse interests including mass production, antiquity, mythology, and the global refugee crisis.

As a prolific artist, activist, architect, curator, and filmmaker Ai Weiwei has developed a body of work that, in addition to installation, encompasses sculpture, painting, photography, film, architecture, public art, and performance.  An outspoken human-rights activist who has openly criticized the Chinese government, Ai Weiwei was arrested by Chinese authorities in April 2011 and detained for three months. His position as a provocateur and dissident artist clearly influences the tone of his most recent work.

Based on his extensive personal and professional experiences inside and outside of China we recommend that you research some of his past prior to attending these provocative exhibits.  It will make his work more meaningful to you