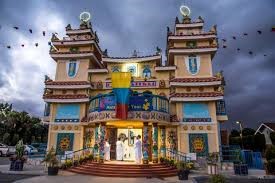 This week we visit the Vietnamese Cao Dai Temple on 3456 Glenmark Drive, in Hacienda Heights. Cao Dai (Caodaism) is a Vietnamese syncretic religious movement which draws upon ethical precepts from Confucianism, Taoism, Buddhism and Catholicism. The term Cao Dai literally means “High Tower or Palace,” the place where God reigns over the Universe. The fundamental objective is the unity of all religions. Inside every Cao Dai Temple is a representation of The Divine Contract of the Third Amnesty. This contract between Heaven and Earth is written and presented to humanity by the Venerable Saints, including Victor Hugo, Sun Yet Sen, Buddha, Confucius, Jesus Christ and Joan of Arc, to name a few.

The Temple courtyard is lined with various Buddhas with written descriptions of who they are and what they represent. The main shrine is for prayer and meditation. When we entered several people were lighting incense and making offerings. Local members of the Temple were friendly and helpful in explaining the religion and its symbols. We were informed that the Eye is a universal potent symbol of the Divine. For each Caodaist, the eye represents our universal heart.

By offering a way of life that concentrates on the harmony of all religions, Caodaism offers harmony to a troubled world, providing spiritual solutions for significant world problems such as racism, intolerance and ignorance.

The Temple offers a vegetarian buffet, free parking, and another worldly spiritual experience for all visitors and religions.