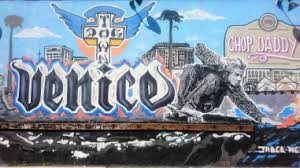 This week, for the more adventuresome and athletic, we recommend taking a Venice bike (or walking) tour of Venice street art.  We took a three hour bike jaunt which included the Santa Monica bike path, inland to the Graffiti Art Park and then along several Venice streets checking out murals painted by artists from all over the world.  Visually amazing, there are many very cool murals. Our guide gave us the inside scoop about what we saw along the way, enlightening us about Venice’s rich, colorful history, and the famous local legends. He related amusing tales about the film stars, Bohemians, artists and poets who contributed to the eclectic seaside community lore. We were fascinated hearing about the background of the artists who created the graffiti on the many walls and buildings we passed in alleyways and streets throughout the route we travelled.  Bike rentals are by the hour and very reasonable. Also, check the web site for Venice bike tours for operators, locations, hours, and rates.

For the international travelers, Melbourne has some very competitive murals.