Hopefully, some of our readers have begun to think about, “hitting the pavement”, talking to a buddy or two about where to go in LA.  Last week we suggested the Great Wall of Los Angeles.

This week, for our law enforcement aficionados, the Los Angeles Police Department (LAPD) Museum is our destination. 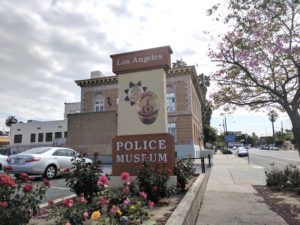 The museum chronicles the history of the LAPD which was founded as a police force in 1869 headed by the City Marshal William C. Warren.   A Marshal!!  Now we know when and where the western films started.

One the best aspects of the museum are its extensive displays.  There are authentic uniforms, pistols, prison cells. There is information about the Onion Field, SLA, and the North Hollywood Shootout. Unfortunately, no information concerning OJ or Rodney King.

We began the tour with our mug shots being taken.  We were then placed in an authentic old jail cell.  Rather confining we thought.  Next, we viewed the extensive handcuff and jail lock collection and saw the interrogation room imagining the prisoners receiving the third degree to extract confessions.   Authentic old police uniforms and pictures of old police notables were on view.

Several rooms were devoted to information and videos about the Onion Field, the Symbionese Liberation Army (SLA) and Patty Hearst escapades involving the LA police, as well as the North Hollywood Bank Shootout.  We were able to see the weapons the robbers used in the shootout and mannequins were dressed in clothing that was similar to that worn the day of the shooting.  An area is provided where you can view the shootout, which was graphic and mesmerizing.

In the back of the building are a variety of police vehicles from bomb squad to cruisers.  There is a police helicopter on display which one can enter and sit in.  Three of the more interesting vehicles were involved in the 1977 North Hollywood Bank robbery.  One car was used by the robbers, one was an LA squad car, and the third was an armored vehicle used to rescue the officers trapped behind the squad car.  All three vehicles were riddled with bullet holes.

Overall, the museum is a good stop, informational and cultural regarding Los Angeles law enforcement.

The museum is located at 6045 York Blvd in Los Angeles and has its own free parking lot.

There is an excellent history of the LAPD on its website.