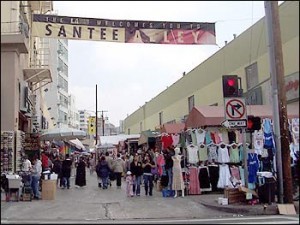 Today we visit two unique downtown LA sites. Our first stop is Santee Alley, described by one person as “The antithesis of Rodeo Drive”.  It’s a scene, it’s chaotic and not for everyone but one of the most popular retail shopping areas around the LA Fashion District.  The web describes it as having the feel of a flea market or swap meet.  The majority of the merchandise are knock-offs, replicas, and cheap items.  Most of the clothing does not have a price tag which beckons haggling.  The Alley has over 150 stores and vendors selling apparel for the entire family, accessories, luggage, toys, shoes, perfume, costume jewelry, gift items, and cheap sun glasses.  There are plenty of bargains.  We often buy four pairs of sunglasses for twenty bucks.

If your stomach can handle it, try a street hot dog.  Santee Alley is an actual alley, located at 210 E. Olympic Boulevard.  It stretches from Santee Street to Maple Avenue and from Olympic Boulevard to 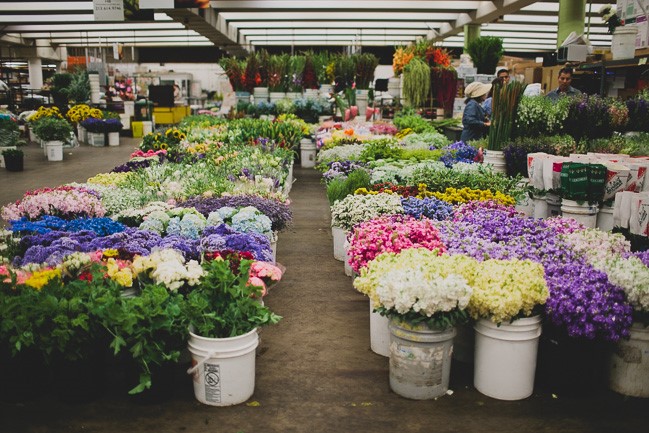 After walking the Alley for an hour and half we drove over to the colorful Los Angeles Flower Market.  It’s only a 10min. drive to 754 Wall Street, between 7th & 8th.  The market is made up of two warehouses opposite each other.  Though mainly a wholesale distributor vendors do sell to the general public.

LA has some wonderful flower shops but this may be the Grand-daddy.  You will be awed by the beauty and variety of the dazzling arrangements.  In addition to the common flowers such as roses, lilies and gerberas there are many other varieties of blooms with fascinating shapes and vibrant colors.  For example potted orchards come in very size for little as $5.  The prices are so reasonable that Bob purchased six dozen roses for about $35.  He distributed several roses to each house in his entire neighborhood.  If you need a vase, pots and random plant accessories such as driftwood and moss this is the place.  Usually open to the general public 8:00AM to 12:00PM. Entry is $2 to both warehouses.  There are parking lots and metered parking on the street.

When finished go to The Pantry for lunch, Figueroa and 9th.  Open since 1924, cash only.  You won’t forget this place; it’s one of Tom’s favorites.