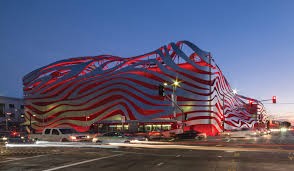 Does this place look cool or not? The Petersen Automotive Museum, for our car enthusiasts, is located on Wilshire Blvd along Museum Row in the Miracle Mile neighborhood of Los Angeles. The museum specializes in automobile history and educationally related programs. It was founded in 1994 by magazine publisher Robert E. Petersen and his wife, Margie. The museum has over 100 vehicles on display in its 25 galleries. The remaining half of the collection is kept in a vault, located on the basement level of the building. Age restrictions and an admission premium over the cost to enter the museum are in effect to view the vault collection.

The ground floor focuses on automotive artistry, showcasing an array of extravagant automobiles. The second floor is principally concerned with industrial engineering-industrial designs, performance, and a collection of interactive teaching exhibits.  Special displays on the industry floor cover racing motorcycles, hot rods and custom-designed cars. The third floor chronicles the history of the automobile with an emphasis on the car culture of Southern California.

If you like cars, this place is a “must see”.

The museum is very children friendly, with lots of interactive exhibits for youngsters. Parking is available on site connected to the museum.