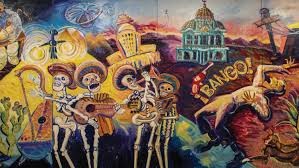 This week we visit the Museum of Latin American Art located in Long Beach. California.  Housed in a contemporary structure designed by Mexican architect Manuel Rosen, the museum is home to four galleries, a contemporary “project space” and an outdoor sculpture garden. Founded in 1996 by Dr. Robert Gumbiner, MOLAA is the only museum in the U.S. dedicated to modern and contemporary Latin American art.  The mission of the museum is to expand knowledge and appreciation of modern Latin American and Latino art through its collections, ground-breaking exhibitions, stimulating educational programs, engaging cultural events, and to promote a cross-cultural dialogue.

MOLAA has a permanent collection numbering over 1,500 works of paintings, sculpture, drawing, mixed media, photography and video art.   We enjoyed the Sculpture Garden which in keeping with the Latin design tradition, features a water element - two low profile bubbling water fountains, the largest being located in the center of the garden.  There is large mural out front, along with a sculpture to the left of the entry way, and a waterfall sculpture facing the street. The exhibitions change frequently and everyone working at the museum was friendly and helpful, some proactively offering us information.

Free admission on Sunday and plenty of free parking on an adjacent parking lot.