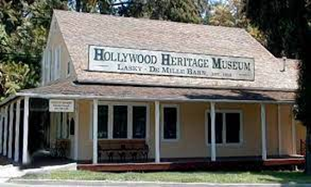 This week we visit a place you have passed or parked directly across from when you visited the Hollywood Bowl, the Hollywood Heritage Museum.

This building is Hollywood’s oldest studio, built as a horse barn in 1901, and the site of the filming of Cecil B. DeMille’s, “The Squaw Man,” the first feature length film made in Hollywood in 1913 and the birthplace of Paramount Pictures.  Restored and operated since 1985 by Hollywood Heritage Inc., Hollywood’s historic preservation non-profit organization, “The Barn” is the site of programs and screenings highlighting the history of the film community as part of their overall mission to save Hollywood for the future.

Bob and I arrived fully vaccinated and masked to tour the museum.  We were met by a friendly staff member who acted as tour guide explaining the history and the many items on display.  He emphasized that much of the history covers the silent film era which ended with the advent of talkies in the late 1920’s.

The museum is open Wednesdays through Sunday, from 12 noon until 4pm, plenty of free parking.