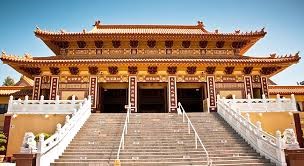 This week we visit the Hsi Lai Temple in Hacienda Heights. This Buddhist Temple completed in 1988 serves as a spiritual and information center for those interested in learning Buddhism and Chinese culture.  Hsi Lai means “coming to the west” and it is one of the largest Buddhist temples in the western hemisphere.  The interior space of the buildings remains faithful to the traditional Ming (1368-1644) and Qing (1644-1912) Dynasty style of architecture.  Likewise, the temple’s courtyard, gardens, and statuary echo the style of ancient Chinese monasteries.

The Temple’s symbolic gate provides a welcome; the Chinese characters on the back of the gate list the four universal vows of Buddhists: to save all sentient beings, to eradicate delusion and stress, to study the boundless Dharma, and to attain supreme enlightenment.  Seated in the Arhat Garden are the Eighteen Arhats, disciples of the Buddha.  These disciples have realized the truth of no-self and overcame the defilements of greed, anger, and ignorance. The Avalokitesvsara Garden and the Courtyard contain symbols of Buddhist teaching.

The Main Shrine is the most important place in any Buddhist monastery because most religious services are conducted therein.  Known also as the “Precious Hall of the Great Hero,” it is dedicated to Sakyamuni Buddha, who possessed the heroic qualities of unsurpassed wisdom, virtue, compassion, and the power to subdue evils, thus saving all sentient beings from ignorance and afflictions.  The monumental statues above the alter depict three Buddhas who manifest perfect enlightenment.  We were permitted to join a religious ceremony in the Main Shrine.  Monks provided audio translations of the prayers enabling us to participate.

The drive from LA took 45 minutes, plenty of parking available.  A vegetarian buffet lunch is available on weekdays from 11:30am to 1:30pm.  Admission to the Temple is free.

We have now written 21 descriptions of various Los Angeles destinations and would very much appreciate your individual feedback.  Is "LA Fridays with Bob & Tom” interesting and does it encourage you to explore our Los Angeles community?  Any ideas to improve the descriptions?

Thanking you in advance please respond to: lafridayswithbobandtom@gmail.com.