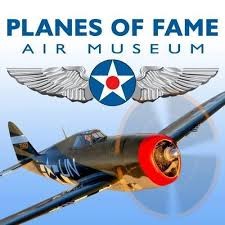 This week for aviation enthusiasts the Planes of Fame Air Museum in Chino, California is our destination.  Founded by Edward T. Maloney in l957, the museum opened its doors with less than a dozen planes.  It was the first aviation museum west of the Rocky Mountains. Now it is home to over 150 display aircraft, numerous historic artifacts and exciting educational exhibits that span the history of manned flight.  Its mission is to preserve aviation history, inspire interest in aviation, educate the public, and honor aviation pioneers and veterans.

The museum has one of the largest collections of Japanese aircraft in the world, including the only authentic flying Japanese Mitsubishi A6M5 zero fighter, complete with its original Sokai radial engine (for those who are interested).  Also, on display is a B-17 Flying Fortress, P-40 Warhawk, German Messerschmitt ME-109, and a Russian MIG 15.  A special exhibit hanger is dedicated to the heroic contributions of the famed WWII 475th Fighter Group.

As you walk through the hangers for an up-close view of the planes, there are captions explaining the planes history, as well as relating the history of the pilot exploits.

There is plenty of free parking available.

P.S.  For the super enthusiasts, next time you’re in Ohio we recommend the National Museum of the US Air Force, located at Wright-Patterson Air Force Base, Dayton OH.