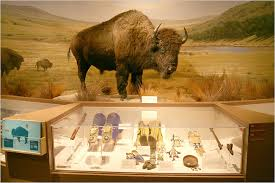 This week we visit the Autry Museum of the American West in LA, dedicated to exploring an inclusive history of the American West.  Founded in 1988, the museum presents a wide range of exhibitions and public programs, including lectures, film, theater, festivals, family events and music, and performs scholarship, research and educational outreach.  The Autry was established by actor Gene Autry and presents contemporary and historical exhibitions, year-round programs for children, intellectual forums and Native Voices at the Autry performing arts series, the only equity theater that has focused solely on producing new works by Native Americans, Alaska Natives and First Nation playwrights since 1995.

The museum is organized into three theme areas:  Religious Ritual, Land and Landscape, Migration and Movement and two mini galleries with revolving exhibits.  The Gamble Firearms Gallery shows the context and place of firearms in the Old West.  Curators grouped firearms by themes: “hunting and trapping, the impact of technology on firearms, the conservation movement and the West in popular culture.”  This is part of the Western Frontiers: Stories of Fact and Fiction Gallery, one of Bob's and my favorite viewing areas.

The museum is located in Griffith Park across from the zoo, admission is free.