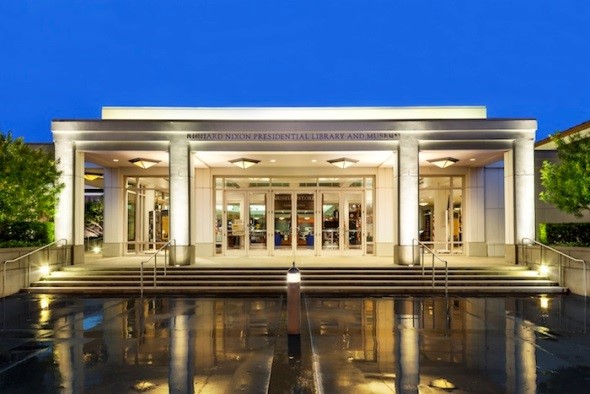 The Nixon Presidential Library and Museum is our destination for this week’s Friday excursion.  Recently renovated the structure is quite handsome and we were pleasantly surprised by the balance shown of this controversial president’s achievements and failures.

There is a full scale replica of the White House East Room, the Bell “Marine One” Helicopter utilized by Nixon when he resigned the presidency, the 1967 Lincoln Continental Presidential Limo, NASA Apollo Artifacts, and an area depicting the first president to meet with China.

One of the highlights was being able to listen to the President on the Watergate Tapes - chilling in authenticity as a reminder of this very difficult time period.

On the grounds are Richard Nixon’s birthplace home and the graves of Richard and Pat Nixon.  The docents were both friendly and informative; the Library is located at 18001 Yorba Linda Blvd, Yorba Linda, Cal.