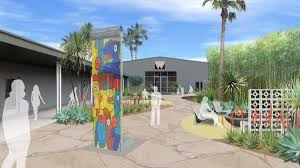 This week we visit the Wende Museum. Its mission is to preserve Cold War art, culture and history from the Soviet Bloc countries. The museum collects and preserves artwork, artifacts, archives, films and personal histories from Cold War era Eastern Europe and the Soviet Union relating to the period 1945-1991. The collection recently moved to a former 60’s national armory located in Culver City. There are photography portraits of Russians from the 1960’s and photos of abandoned Soviet buildings, monuments and architecture. We found the sections and items relating to Communist Government surveillance of their citizens particularly interesting. On display was a large section of gifts to communist dictators and pieces of the Berlin Wall.  There is an area displaying Soviet space program propaganda, including posters, sculptures honoring space dogs, and footage from a Sputnik stop-motion animated TV special.

The museum is free, guided tours are available.  it’s open on weekends with plenty of free parking.