LA Fridays with Bob and Tom: The Japanese Garden 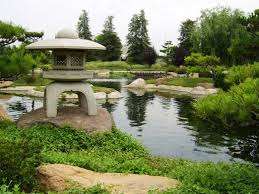 This week we visit the meditative oasis, "The Japanese Garden," nestled in the heart of San Fernando Valley.  Its Japanese name is Suiho-En meaning “Garden of Water and Fragrance.” The garden is located at 6100 Woodley Ave., Van Nuys, California 91406 adjacent to the Donald Tilman Water Reclamation Plant.  As one enters the Garden there is a Zen meditation dry garden featuring "Tortoise Island," a “three Buddha” stone arrangement and a wisteria viewing arbor.  Next, there is an expansive stroll garden with waterfalls, lakes and streams, abundant greenery and stone lanterns carved by artisans in Japan, and the Shoin Building with a contiguous teahouse and adjacent tea garden.

The uniqueness of this garden is that it is authentic in every detail.  The water features diving birds and white herons swimming gracefully, your companions as you stroll the garden paths among the floral and weeping willow trees.  The exquisite design of The Japanese Garden allows us to focus on the simple and beautiful in nature and our lives.  A peaceful get away from the stress and pressures of everyday life.

We think this venture is a “must.”  It’s a perfect place for photos, sketching and painting.