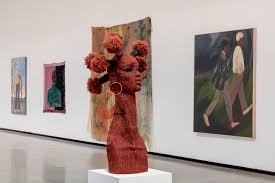 Today we visit the Jeffrey Deitch Gallery, 925 N. Orange Drive, LA, to view the exhibition “Shattered Glass.”  Unique because every face in every pairing belongs to a person of color and each piece of art was created by a person of color.  The exhibition was originally organized by two young people of color curating their first show: Melahn Frierson, director of the LA Gallery, and A.J. Girard, an arts educator, who wanted to process all that was happening in the country around racial justice and the pandemic.

I particularly enjoyed the works by the self-taught artist Fulton Leroy Washington (a.k.a. Mr. Walsh}; “Emancipation Proclamation,” 2014; “Shattered Dreams,” 2020; and “Targeted-Insurrection,” 2021.  The artist learned to paint while he was in prison serving twenty-one years of a life sentence for a nonviolent drug offense.  President Obama granted him clemency and commuted his sentence in 2016.

Since society has so long failed to question shows featuring only white artists, the exhibition of forty black artists seems to ask, “Why not similarly get used to shows with only artists of color?”  And certainly, more frequently.

Typical of Jeffery Deitch Gallery, it was a delightful exhibit.