LA Fridays with Bob and Tom: Museum of Neon Art 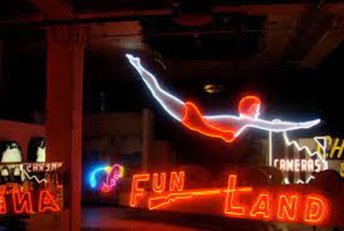 This week we visited the Museum of Neon Art in Glendale, California, encouraging learning, curiosity and expression through the preservation, collection and interpretation of neon, electric and kinetic art since 1981.  Several neon art works and signs are on display, including a huge Chinese dragon, numerous bar signs, and neon signs advertising shop keepers.  Neon, derived from the Greek word for “new”, was the first noble gas widely used in luminous tubing. Though most commercial tubes are filled with argon and mercury, neon has become synonymous with luminous tubing.  Neon signs and artworks are comprised of glass tubing softened over flame and bent by skilled craftspeople.  After cooling the tubes are pumped with noble gases and electrified.  Classes are offered by the museum including Neon Immersive, Introduction to Neon Art, and Bend Blow & Glow.  You can experience the entire process of bending neon, from glass to glow.  Learn all the skills necessary to design and assemble your own neon sculpture or sign.

Plenty of parking.  Staff is very friendly and helpful if you have questions.