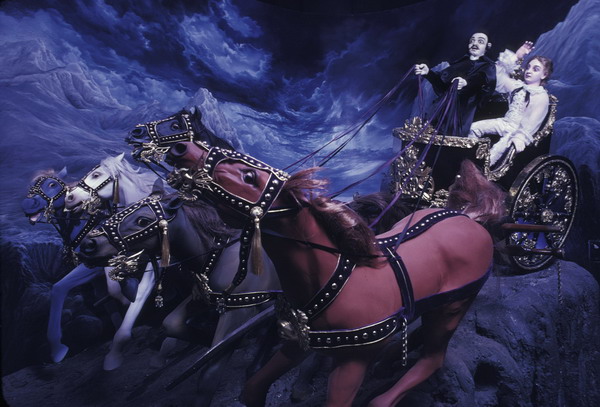 Bob and I traveled to the Bhagavad-Gita Diorama Museum, at 3764 Watseka Avenue, Culver City, for a spiritual awakening that explains the story of Krishna, a major Deity in Hinduism.  Krishna is the Hindu god of compassion, tenderness and love.  The Bhagavad –Gita (the Song of God) is universally regarded as the jewel of India’s spiritual wisdom. The Gita (short for Bhagavad-Gita) provides a definitive guide to the science of self-realization.  The Gita is set in a narrative framework of a dialogue between Pandava prince Arjuna and his guide and charioteer Lord Krishna.

The museum is meant to educate, inspire, and give visitors a better understanding of the Bhagavad-Gita, the Indian literary classic that remains sacred to over six million people.  The Museum is a walking tour through dioramas that move, light up, and have subtle special effects.  There are eleven dioramas and numerous animatronics that lead visitors through the story.  In each diorama, talking clay robots give their unique perspective on the Bhagavad-Gita.  Audio plays along with the dioramas and guides you through the stories.  The story concludes in the final diorama, which is filled with dancing, pipe playing, and melodic chanting.  The self-guided tour takes about 45 minutes to walk through.  Beatle George Harrison, after visiting the museum, commented that the sculpted dioramas look great, and the music is nice.  It gives people a real feel for what the Kingdom of God must be like, and shows exactly how the body is different from the soul, and how the soul’s the important thing.

There is a limited amount of free parking, the museum tour opens at 11:00 AM, and there is a vegetarian Indian buffet served next door.

This is an unusual experience and we highly recommend it.