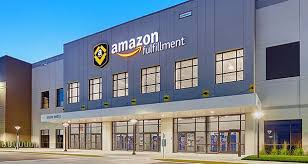 Amazon (not the Brazilian jungle but our Amazon) is now ubiquitous to our daily lives.  Like millions of its customers I love this company.

Normally we would be reviewing and recommending a tour of one of the Amazon Fulfillment Centers in person however our tour appointment was cancelled due to Covid-19.  Sure enough, a couple of weeks ago we were sent a video tour as a replacement.  Why am I not surprised?

What we view is the extraordinary coordination of all the processes within the warehouse from start to finish - of incoming inventory from manufacturers worldwide being stored and eventually shipped directly to customers.  The name reflects function:  Amazon fulfillment centers are charged with fulfilling customer orders.  Amazon warehouses, some 10 football fields in size, store products and serve as distribution centers where associates pick, pack, and ship orders quickly and efficiently.

These Fulfillment Centers utilize the latest technologies:  robotics, scanning machines, and computer systems in in order to store, package, mail and track millions of items each day.  The robots enlisted within Amazon’s fulfillment centers are essentially robotic arms and small drive units designed to assist the associates to achieve faster shipping times, maximize inventory and keep costs at a price that satisfies its customer base.

The video can be viewed at the link:         https://amazonfctours.com/navideotour