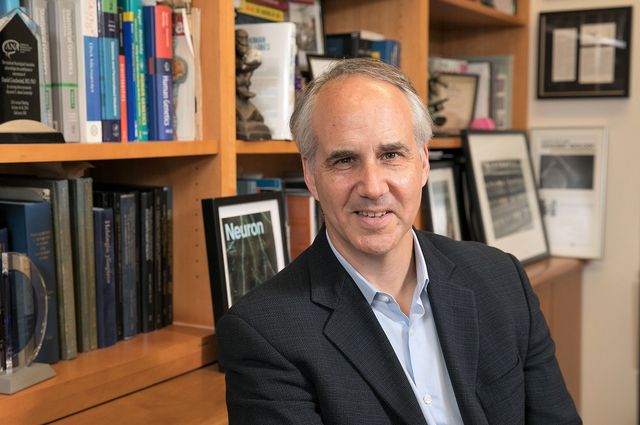 Dr. Daniel Geschwind is a senior author of two of 10 new studies that provide comprehensive data on the molecular workings of the brain.

Since the completion of the groundbreaking Human Genome Project in 2003, researchers have discovered changes to hundreds of parts of DNA, called genetic variants, that are associated with autism spectrum disorder, schizophrenia and other psychiatric diseases. Now, a new, large-scale study has linked many of those changes in DNA to their molecular effects in the brain, revealing for the first time mechanisms behind those diseases.

In 10 studies published today in Science and two related journals, UCLA researchers and collaborators from more than a dozen other institutions around the world provide a comprehensive data set on the molecular workings of the brain. The findings offer a roadmap for development of a new generation of therapies for psychiatric conditions.

“This work provides several missing links necessary for understanding the mechanisms of psychiatric diseases,” said Dr. Daniel Geschwind, a senior author of two of the papers, and the Gordon and Virginia MacDonald Distinguished Professor of Human Genetics at the David Geffen School of Medicine at UCLA.

During the past decade, scientists have compared the genetics of people with psychiatric diseases with those of healthy individuals, seeking genes that have different sequences between the two groups. Often, however, the findings raised more questions than answers. Scientists not only discovered genes linked to the diseases, but they also uncovered hundreds of areas of DNA found in between genes, called regulatory DNA, that also seemed to have an association.

Scientists know those sections of DNA can control when, where and how genes are turned on and off. But figuring out which regulatory region affect which genes — and therefore the RNA and proteins encoded by those genes — is not straightforward.

In 2015, researchers from UCLA and other institutions from around the world came together in a multidisciplinary group called the PsychENCODE Consortium to study in more detail the brain’s regulatory DNA. An earlier project, known as ENCODE, already had uncovered the roles of sections of regulatory DNA, but it was clear that those roles might be different in the brain than in other organs.

To date, PsychENCODE has analyzed not just genetic variants linked to psychiatric diseases, but also patterns of RNA and proteins in 2,188 brain tissue samples from people with and without psychiatric disorders.

In one of the new papers, Geschwind and collaborators write that the new data helps explain the roles of tens of thousands of sections of regulatory DNA in affecting RNA and proteins in the brain. The data also reveals which genes are most often expressed at the same time as each other, suggesting new biological processes and pathways. The data set — essentially a detailed model of the molecular workings of the human brain — is now available to other scientists as a starting point for research on the mechanisms of disease and potential drug targets.

“This resource is so vast that you can start by choosing an interesting disease-associated genetic variant and begin digging into that and discovering how it impacts molecular networks in the brain,” Geschwind said. “Having robust data of this scope provides a foundation for countless new studies.”

In a second paper, Geschwind, first author Dr. Michael Gandal, assistant professor of psychiatry and biobehavioral sciences at the Geffen School of Medicine, and other collaborators studied nearly 1,700 samples of brain tissue from multiple brain banks around the country; they discovered thousands of RNA molecules that are either spliced differently — with different sections of genetic material — or present at higher or lower levels in the brains of people with autism spectrum disorder, schizophrenia and bipolar disorder.

“You can’t look at the brain under a microscope and see substantial differences in these disorders,” Gandal said. “But we’ve now shown that if you look finely at patterns of how genes are expressed, you see pathways [the communication paths that neurons travel] that are clearly dysregulated.”

Among the surprises in the data is that altered levels of RNA appear to be linked to changes in the brain’s immune system in people with schizophrenia, autism spectrum disorder and bipolar disorder.

The study also showed the importance of considering which individual cell types within the brain were involved when parsing the RNA data. In some cases, alternately spliced RNA was linked to disease but only when the RNA was found in certain cell types and not others. Finally, new genes were implicated in the diseases based on the RNA results; five were linked to autism spectrum disorder, 11 to bipolar disorder, and 56 to schizophrenia.

In addition to the compelling findings already revealed based on the new data, Gandal said he is even more optimistic about what the data will help researchers do in the future.

“This is the tip of the iceberg,” Gandal said. “The ability to compile together 2,000 brains has been revolutionary in terms of revealing new genetic mechanisms, but it also points to how much we don’t know.”