Leading homeless veterans back into mainstream of life 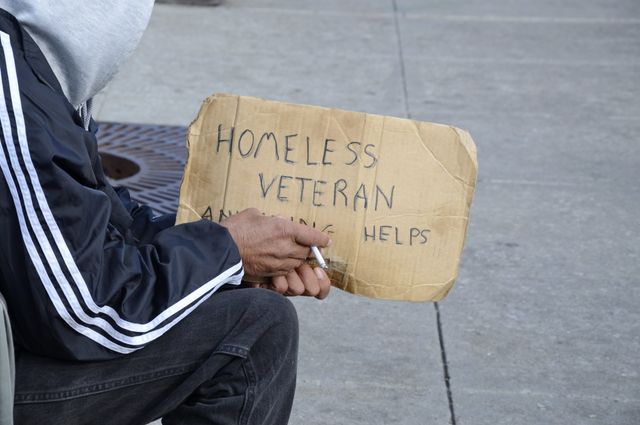 A team of researchers from UCLA's Semel Institute for Neuroscience and Human Behavior will determine whether formerly homeless veterans with brain-based deficits will succeed or fail at integrating back into the community. The team also plans to measure the effectiveness of a range of potential remedies.

After bouncing among homeless shelters in Los Angeles for more than two years, disabled veteran Brandon Murphy expected to get his life back on track when he landed in an apartment in Inglewood, thanks to the Veterans Affairs housing support system.

“My social life is nothing,” says the 38-year-old veteran. “I’ve been out of the loop so long I really don’t talk to many people at all. There’s a lot of fear in balancing and maintaining in society.”

Murphy exemplifies a significant — and unrecognized — hurdle in the ambitious quest to end homelessness among veterans.

Even after getting off the streets, only a small fraction of these veterans reconnect with family or resume or start friendships. Most don’t increase the number of days they work; in fact, a striking number quit their jobs. Many struggle with such daily activities as navigating public transportation, cooking, shopping for groceries or managing a budget. One newly housed veteran couldn’t leave behind the shopping cart that carried his belongings; he wheeled it into his new home.

“You can solve homelessness. You can provide housing and support … and authorities are doing that in conjunction with the VA,” said Michael Green, a UCLA professor of psychiatry and researcher at the Semel Institute for Neuroscience and Human Behavior. “But we need to acknowledge, measure or seek to resolve the next problem: integrating them back into the community. For that, at this point, there is no solution.”

That’s why Green is leading a team of 10 psychiatrists, psychologists and other neuroscientists on a quest to pinpoint brain-based obstacles that hold back many vets who have experienced homelessness and hone in on potential remedies. With nearly $2.4 million in new grants from the U.S. Department of Veterans Affairs and a support staff of at least 15, the team will spend the next five years studying more than 500 homeless veterans as they secure housing; the researchers will analyze who thrives, who doesn’t and why.

Nobody knows precisely why rejoining the mainstream of life is such a challenge for this group or what steps will help them, Green said. But if anybody is up to the task, it’s his lab. Cumulatively, the researchers have spent more than 20 decades studying another population that struggles with community integration: individuals with psychotic disorders, including schizophrenia. In fact, the lab is known as the world’s leading source of research into how problems in thinking lead to problems in the daily lives of individuals with psychosis. The team has identified a suite of subtle but profound brain-based impairments that afflict these individuals, and researchers believe these same deficits may be tripping up at least some veterans with a history of homelessness.

Statistics show these veterans are more likely to suffer from psychosis than veterans who have never been homeless. Other researchers have found that veterans who’ve experienced homelessness also are more likely than other veterans to have a history of either traumatic brain injuries or post-traumatic stress, both of which come with social deficits similar to those found in psychosis.

For instance, after Murphy left the Army, he earned a B.S. in business management and was working as a civilian with the Navy when he became disabled with bipolar disorder.

“I worked hard to get to a certain place, and the disease took over,” said the former production controller.

His problems escalated after a suicide attempt in 2013. He was admitted to a psychiatric ward, which he then left for a series of homeless shelters, single-room occupancy hotels and temporary veteran housing.

Murphy said he longs to be close to his 12-year-old daughter in Corona, but doesn’t quite know how to connect with her. He’s in touch by phone with his mother in the Midwest, but has distanced himself from the rest of his family.

“I don’t think many people can tell me how to pick up and go on,” he said.

The answers may lie in the discoveries that Green’s lab will make. The researchers will closely examine four characteristics in formerly homeless veterans: visual perception; responses to social cues; thinking abilities, including memory; and levels of motivation. Green’s lab has found that individuals with schizophrenia significantly lag healthy individuals in these areas. These deficits correspond with altered or diminished activity in specific areas of the brain, according to advanced brain scans of individuals with schizophrenia.

“Because their brains did not develop in a fully normal way, people with psychosis handle incoming information in a clumsy way, which makes it hard for them to understand what people around them are doing, to respond appropriately to social cues and to function in daily life,” Green said. In fact, these deficits tend to affect the lives of individuals with psychotic disorders much more than such better-known symptoms as having deluded thoughts, hearing voices or seeing delusions, he said. And medications that tame these classic symptoms do nothing to improve the more functional ones.

The UCLA-VA study will determine whether the veterans with these brain-based deficits are indeed the ones who fail to integrate into the community after securing housing. As homeless veterans transition into housing, researchers will use an EEG, a test that measures brain waves, to detect any abnormalities in the electrical activities of their brains and sit them down to computer-based tests that identify any deficits in cognition, memory, social awareness and motivation.

Green’s lab will not just illuminate factors that handicap veterans with a history of homelessness, but it’s expected to shed light on why the best efforts to house these individuals often unravel. Even when social services are provided, about one quarter of newcomers to a housing program run by the VA and the U.S. Department of Housing and Urban Development leave it in the first year for drug and alcohol rehabilitation programs, incarceration and life on the street, among other options.

“It’s as though providing housing is a necessary but insufficient means of helping formerly homeless veterans find a place in the world,” Green said.