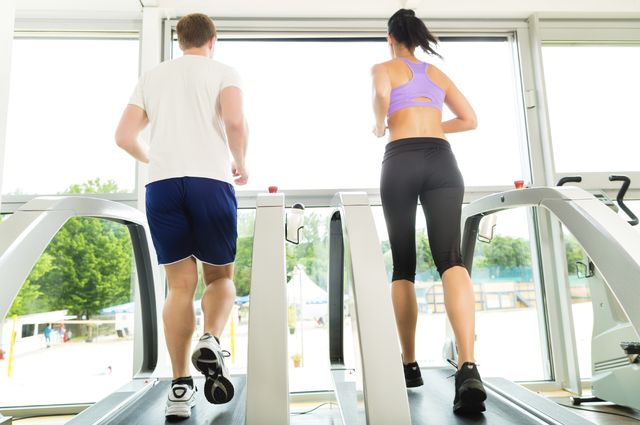 People who included walking or jogging along with resistance training in their treatment had a 15 percent increase in the number of dopamine receptors in the brain.

Can you physically outrun an addiction? Of course not.

But a new study by UCLA researchers found that exercise, when combined with traditional behavioral therapy, helped people who were addicted to methamphetamine.

The study, involving 19 people, showed that those who included walking or jogging along with resistance training in their treatment had a 15 percent increase in the number of dopamine receptors in the brain. The dopamine system is directly impacted by meth use; restoring these receptors reduces people’s craving for the drug.

The study was published online by the journal Neuropsychopharmacology.

Methamphetamine is a powerful, addictive drug that causes the brain to release a spike of dopamine, a neurotransmitter, creating a high that can last up to six hours. Dopamine allows cells to communicate, but it also has a role in responding to external stimuli — including drugs — providing sensations of pleasure and satisfaction. With repeated meth use, the dopamine system is suppressed, and the number of dopamine receptors is reduced.

With treatment, these receptors can recover over time, but the rate of recovery varies widely, and some deficits last well beyond the time people stop using drugs. In addition, other studies have suggested that chronic meth use can cause long-lasting problems in brain function that may affect judgment and self-control.

The study, which was based on earlier studies of animals, was led by Edythe London, professor of psychiatry in the Semel Institute for Neuroscience and Human Behavior at UCLA, and professor of molecular and medical pharmacology at the David Geffen School of Medicine at UCLA.

Participants were randomly assigned to two groups and were then given positron emission tomography, or PET, scans. The scans looked at dopamine receptors in the striatum, a part of the forebrain and a critical component of the reward system. The scans showed no significant difference in striatum dopamine receptors between the groups. For eight weeks, 10 subjects were assigned to walk or jog on a treadmill three times a week for one hour, and to do resistance training, using weight machines, free weights or both. The other nine participants were given health education training for the same time period but did not exercise. After eight weeks, all participants were given a second PET scan.

“We know that deficits in the striatal dopamine system are hallmark features of substance-use disorders and are caused by molecular adaptions to repeated drug exposure and, likely, also reflect a genetic predisposition,” London said.

“Although this is a small study, it’s a very encouraging finding,” she added. “The results demonstrate that methamphetamine-associated damages to the dopamine system of the brain are reversible in human subjects, and that recovery of the dopamine system after chronic drug use can be facilitated with exercise training.”

Understanding the molecular mechanisms by which exercise affects dopamine signaling in people who are trying to overcome addictions could lead to new clinical approaches to improve treatment not only for people with addictions but also for people with neuropsychiatric disorders, London said.

The study’s other authors were Joy Chudzynski, Larissa Mooney, Richard Rawson, Brett Dolezal and Christopher Cooper, all of UCLA; and Chelsea Robertson, Kenji Ishibashi, Amira Brown and Mark Mandelkern, all of UCLA and the Greater Los Angeles Veterans Affairs Hospital and Health Care System. Funding for the study came from the National Institutes of Health and the National Institute on Drug Abuse (R01DA027633).