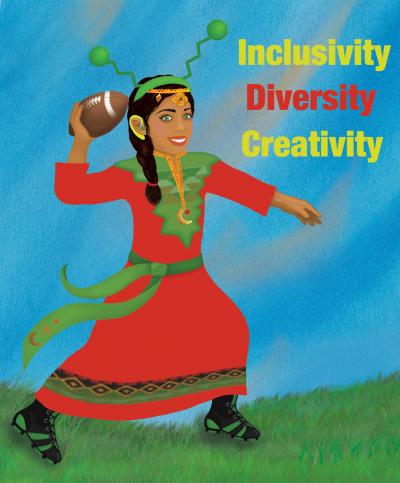 My NADC grant enabled me to attend the Society of Children's Book Writers and Illustrators 2017 Summer Conference. That experience gave me training in illustrating and writing children's books that has allowed me to create two book projects -- a picture book about a Muslim princess and a middle grade novel about an unprecedented co-ed Saudi-International "tween" soccer team, both narrated by a globally hypermobile "diplobrat" with a disability.

As a UCLA trained artist with physical disabilities, who has created photography, painting, video and ceramics that exhibited and placed in several national juried shows, I had long wanted to branch out into creating children's books. My NADC grant made it possible for me to attend a Society of Children's Books Writers & Illustrators National Conference and stay at the conference hotel, which allowed me to participate in all the programs despite disability-related energy limitations. After that four day immersion in illustration, characterization and composition and an individual consultation with an art director, I completed a 10 image illustration portfolio with an emphasis on inclusivity and diversity in my drawings. With my new skillset, I then created a "draft dummy" (storyboard with complete text, all sketches and 5 color illustrations) for a picture book and drafted a middle grade novel.

My picture book, "Midnight Lunch at the Princess' Palace," depicts the true tale of my childhood encounter with a disability advocate Arab princess. My middle grade novel, "The Sideliners Strike Back," follows the evolution of the unprecedented co-ed multicultural soccer team that emerged after a terrorist attack interrupted the soccer season at a Saudi-American international school.The team grapples with sexism, ableism and racism as well as the usual adolescent angst. The novel also provides one untold backstory in Saudi women's struggle to participate in sports. Both stories draw on autobiography, recounting my experience as a young artist and athlete with a disability living abroad, but in each instance, the narrator's disability is not the center of the story, but rather a realistic element of the narrator's character. Like many in the disability community, I feel it's important that there be such stories, where a disabiity does not define a character.

Having grown up in four different countries with invisible physical disabilities, I am acutely aware of cultural and ethnic diversity and the human propensity to define others without really knowing them. I create my art with that in mind and nowhere more so than in these children's book projects. As an artist with disabililties who painted for a princess and played as an athlete ally with Saudi women seeking to break the gender sports barrier. I hope to encourage children to dream and create without limits. I am currently seeking an children’s lit agent to represent me who shares my commitment to the disability community.