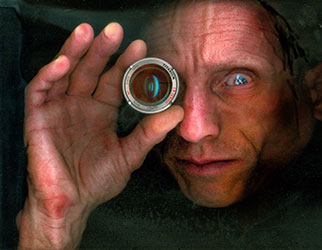 Kurt Weston, world-class photographer turned blind visionary is a resident of Mission Viejo, California and a Master of Fine Arts graduate from California State University, Fullerton. As a legally blind artist Weston offers alternative views and perspectives - interpreting the world as he now perceives it. For the past several years, Kurt has been experimenting with alternative image capture which transmogrifies images to represent various aspects of his visual impairments.

Weston is grateful for the many Arts and Accessibility grants he has been awarded in the past several years. These grants have been vital in assisting him with acquiring materials to create artworks which have been exhibited both nationally and internationally. Below are some highlights of exhibits and opportunities which the Arts and Accessibility grants have assisted Weston.

Weston’s work has been shown in four exhibits at the Kennedy Center for the Performing Arts in Washington DC. His work was also featured in Sight Unseen at the California Museum of Photography which has continued touring internationally since 2009. In 2010 Kurt was recognized by Arts Orange County with the Outstanding Artist Achievement Award for his solo exhibition “Seasons in the Prayer Garden.” In 2012 he appeared on national television, CNN’s Fredricka Whitfield show highlighting his photographs and advocacy. Weston’s work is in the permanent collection of The Houston Fine Arts Museum, the Museum of Contemporary Photography in Chicago, IL, the National AIDS Museum, Seton Hall University, NJ, the Southern California College of Optometry, Fullerton CA, and in many private collections.

Weston was once a glamour photographer who traveled to Europe with professional makeup artists and hairstylists, transforming models to create the ultimate in style and beauty. His life changed in 1996, when Weston became legally blind from Uveitis, leaving him completely blind in his left eye and with limited peripheral vision – no central vision in his right eye – which permits him to see the world as it appears in an impressionist painting.

“I’ve learned how to employ the use of low vision magnification devices and adaptive computer technology to continue my work as an artist,” said Weston. “I combine highly stylized and color-saturated images with illustrative graphics and painterly backgrounds to transform the images into unique, contemporary photo montages.”