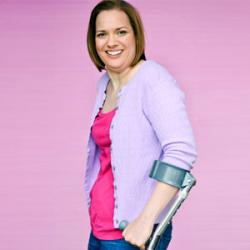 The first time I received a grant was approximately the beginning of 2009. I use the monies awarded to help do a final edit on my Feature Film entitled Dangerous Perceptions. Please check out the website www. dangerousperceptions.com.

The money was incredibly helpful because I wrote, starred, produced, and financed my Feature film through in-kind donations, family, and friends. To be clear, I come from a very working-class background. So, it was a really Grassroots Independent Film in every sense of the word.

The most recent time I received the Arts and Disabilities Grant was this April 2018. I wrote and created an acting piece to be submitted For Your Consideration (FYC) for Outstanding Lead Actress in a Comedy or Drama, Short Form for The Academy of Television Arts and Sciences (One of The Awards for Television Excellence/ The Emmys). I, basically, submitted a web series called What's Your channel 4 Life.? The entire web Series can be found on www.whatsyourchannel4life.com

My Emmy entry is called Barbie + Ken and it is episode number 4 in the What's Your Channel 4 Life series.

This is only the third year that they had the Short Form category. As a Performer With a Disability (I have Cerebral Palsy. I use crutches and/or a wheelchair daily). I typically only audition for roles that are under 5 or less. This is not always give me the opportunity to mainstream and show my work as much as I would like. As a result, I create a lot of my own work.

The ending on this particular story has not been written yet. I'm hoping for a happy Hollywood ending. I would like to receive an Emmy Nomination, and ultimately the Emmy win for my Short Form entry What's Your Channel 4 Life? Voting for the Emmy Awards begin on June 10th and nominations are announced mid-July 2018.

So far, the For Your Consideration (FYC) process has been fun, exciting, eye-opening, and exhausting all rolled into one. As a truly independent Artist, I'm learning a lot about the Studio System and major production companies in town. Through my efforts of networking at all these FYC events, I met a group of extraordinary people who work in the entertainment industry. My hope is, by showcasing myself, my work as an Artist will be seen by more people and I will have more opportunities to work mainstream in a Non-Traditional Acting capacity.