UCLA faculty voice: The science behind our love for March Madness 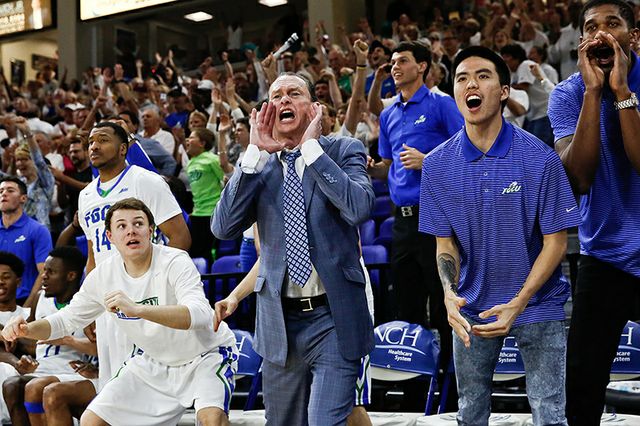 Marco Iacoboni is a professor of psychiatry and biobehavioral sciences at the David Geffen School of Medicine at UCLA and a member of the Semel Institute for Neuroscience and Human Behavior. This column ran March 17on the Washington Post’s website.

It’s that time of the year: March Madness. And madness seems an apt name for the waves of ecstatic, tranced, adoring fandom that ripple across America. In fact, it goes well beyond the United States. I have Italian friends in Italy that spend their nights glued to the TV screen to watch the American college teams battle, despite the six- to nine-hour time difference between the United States and Italy.

Why are we so passionate about sports? Why does watching someone else play basketball (or tennis or soccer or football, to name a few) give us such strong feelings? Even when our team or favorite athlete is on the losing side, we crave more. Despite negative emotions, we can’t wait for the next game, the next match, the next NCAA tournament.

The answer is complex and requires us to look at human nature from a range of perspectives. One vantage point is neuroscience: in particular, the study of mirror neurons, brain cells that have surprising properties that go against our scientific intuitions about how the brain should work.

We tend to think about the brain as a machine that receives inputs, processes those inputs and spits out a response. I see you waving at me, I decide that it’s a nice gesture that I want to reciprocate and I wave back at you. There is perception (vision in this case, seeing you waving at me), cognition (interpreting the gesture and deciding what to do to respond to it) and finally action (making the waving gesture back at you). It’s all nicely serial, one thing preceding the next one or following the previous one. And it makes sense, doesn’t it? Except that it’s all wrong. Our brains don’t seem to think that that’s the best way to get things done.

Indeed, our brains contain mirror neurons in a number of brain areas. These brain cells fire when I see you waving at me and also when I am waving back at you. Mirror neurons pepper many brain areas that control our movements, from grasping to reaching to moving our eyes. Their astonishing properties tell us that when I see you moving your body, it is as if I see my own body moving, reflected by a mirror. “The minds of men are mirrors to one another,” wrote philosopher David Hume centuries ago. Modern neuroscience has discovered that he was right all along.

When we watch the players battling on the court, cutting across the defense with a no-look pass, shooting from the three-point line or blocking a shot of another player, mirror neurons make us literally feel what the player is feeling (to a milder degree, of course). Our brains are reenacting internally what we watch. It is as if we are almost playing the game ourselves. We try to mimic what the athletes are doing. (Have you found yourself making a little jump when a player from your team is doing a jump shot?) No wonder we become so engaged in the games or that we spend our time and energy watching them.

There’s more. When we watch the game, other people are doing the same. They are as transported into the action as we are. Other people watching the game will unthinkingly mimic the little jump just as we do. We mirror the actions and emotions of the game together with other people, and our mirror neurons make us reflect the other sport fans as well.

But why do we have mirror neurons in our brains to begin with? What’s the “adaptive” advantage of having these cells? There are multiple benefits: First of all, we learn by observing others. This is important in navigating novel social situations when we don’t know exactly how to behave and yet do want to blend with others. Mirror neurons are also important for learning skills, and indeed learning by observation is a crucial aspect of learning how to play sports. (Especially for beginners, coaches often prefer their students not to overthink how to make a shot, but rather just to observe how a skilled player — usually the coach! — does it.)

But above all, mirror neurons make us connect emotionally with others. When I watch your smiling face, the mirror neurons for smiling fire up in my own brain, and I immediately feel what you feel. This is widely believed to be the very first step for empathy, for the human capacity to experience what others are experiencing and eventually help them if needed. Indeed, studies have shown that the more active are brain areas with mirror neurons when we watch others’ actions and emotions, the more empathic we are.

When we watch sports, all these functions engage. Mirroring actions and moving our bodies together with others gives us a sense of togetherness, a sense of communion with others, a sense of belonging to a larger entity than ourselves that reminds us of ancient rituals that have disappeared in our society. Thus, sports help fill the need we have to connect with others, the desire for a transient but thrilling moment. No wonder we want more.