Knowing how the discharges of single neurons and groups of neurons give rise to our thoughts, feelings, decisions and choices of action, lies at the fore of cognitive neuroscience. We know very little about how the activity of populations of neurons relate to behavioral choices, yet answers to such questions stand to reveal the fundamental mechanisms underlying neurological and psychiatric diseases ranging from Parkinson’s disease to addiction and schizophrenia. In my research program at UCLA we focus on understanding the role of the basal ganglia and its inputs to the superior colliculus in cognitive processes related to decision-making. We incorporate a variety of experimental approaches. Our primary focus emphasizes behavioral, electrophysiological and computational techniques in the non-human primate. We work closely with neurologists, neurosurgeons and neuropsychologists to translate our work with monkeys in to humans with disease. Although powerful, work with monkeys and humans is limited in its ability to reveal insights into the cellular and molecular mechanisms underlying cognitive processes. Therefore, to uncover cellular mechanisms, we perform experiments using the in vitro rodent model and biophysical tools such as patch-clamp recording and voltage imaging. In the laboratory we explore fundamental questions in cognitive neuroscience: 1) how are decisions represented in the sensorimotor networks of the basal ganglia and superior colliculus? 2) what are the computational principles that underlie decision-making? 3) how might these mechanisms go awry in disease? and 4) what are the cellular and synaptic mechanisms and dynamic properties of sensorimotor networks in the superior colliculus underlying decision-making? Below I provide an overview of our ongoing experiments and those planned for the near future.

Decision-Making in the Superior Colliculus and Basal Ganglia

Based on our results, we asked how superior colliculus neurons were pooled and read-out to inform a choice of action. In this line of work we applied theoretical models of population decoding schemes. 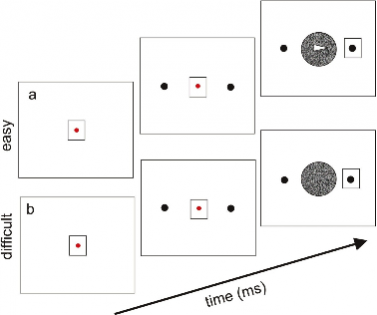 For example, we implemented a population vector average, a winner-takes-all and a Bayesian estimator to our colliculus neuronal data. We found that when the neuronal activity was pooled, the Bayesian estimator predicted the choices more accurately than either the winner-takes-all or the population vector average (Kim and Basso, 2010). Our results reveal that variability in neuronal discharge is an important parameter to consider for a complete understanding of how the brain represents choices of action and importantly, the uncertainty monkeys may have regarding their choices. figure 1This result prompted us to begin asking the question of how decisions are made when sensory information is ambiguous. Indeed, making decisions in the face of uncertainty is a situation with which we are often confronted. An example of the task that our monkeys perform to assess decision-making under uncertainty is shown in the figure on the left. In the easy trials (a), the image appears clearly as an arrow and the monkeys’ task is to look at the circle to which the arrow points. On the difficult trials (b), the arrow is not seen clearly and the monkeys must still make a decision, right or left. By varying how difficult the arrow is to see we can vary parametrically the uncertainty that monkeys have in their decision. What cues are used when forced to make a decision under uncertainty? One possibility is that we use our memories, or past experience. Therefore, we also vary which target is correct on the trials. For example, we can set the probability structure of the task such that on 70% of the trials, a rightward choice is always correct and on 30% of the trials, a leftward choice is correct. Monkeys have to learn and remember this 70-30 split over time. Then we can assess to what extent monkeys rely on sensory information versus information stored in memory to make decisions when faced with uncertainty. This work is based in a strong theoretical framework of statistical decision theory called Bayesian inference. Our plan is to perform simultaneous multiple neuron recordings during performance of this task to look for neurophysiological signatures of decision-making with and without sensory uncertainty.

A number of clinical phenomena seen in movement disorders may result from underlying deficits in higher cognitive processes, such as decision-making. We have been translating our findings in monkey into the clinic by testing patients with Parkinson’s disease on the same decision-making task that we use in our monkeys. In medically-treated patients with Parkinson’s disease and in those patients who received surgical treatment of their disease, we are testing whether the disease or the treatment influences the ability to make decisions in collaboration with Dr. Nader Pouratian in the Department of Neurosurgery and Dr. Allan Wu in the Department of Neurology. Whereas others focus on decision-making under risk and the influence of reward, we are interested in understanding how the basal ganglia contribute to decision-making in the presence of sensory uncertainty and with memory information available (or not) to inform decisions. By comparing results in monkeys and humans directly we are well-poised to reveal mechanisms of decision-making in health and disease. We recently received an award from the Dana Foundation to perform this work.

Since Parkinson’s disease is a basal ganglia disease, we also explore the role of the inhibitory input arising from the basal ganglia to the superior colliculus in decision-making in monkeys. One of two output nuclei of the basal ganglia is the substantia nigra pars reticulata. The nigra has direct, inhibitory input to the superior colliculus. Our first tack has been to perform stimulation and recording experiments to reveal the circuitry of the nigra - superior colliculus connection and its influence on movement behavior in monkeys. Our first series of experiments explored the influence of electrical stimulation of the nigra on behavior and on superior colliculus neuronal activity. In addition to providing useful information on which to base further experiments, the results of these experiments provide us with a model to test some hypotheses about the mechanisms of action of a therapy that is used to treat a number of psychiatric and neurological disorders called deep brain stimulation. This neurosurgical treatment is used to treat patients with movement disorders most commonly, but it is also used to treat patients with medically refractory depression, Tourrette syndrome and obsessive compulsive disorder. Although the nigra is not typically a target of deep brain stimulation in patients, we reasoned that the relatively well-known role of this pathway in eye movement behavior would make it an ideal model system to study. By performing systematic, parametric studies of electrical stimulation of the nigra and measuring eye movements, we determined how the stimulation affects behavioral output (Basso and Liu, 2007).Electrical stimulation of the nigra results in impairments in monkeys’ ability to make eye movements when guided by memory. When the eye movements are guided by vision, electrical stimulation of the nigra has little effect. Following up on this experimental result, we performed an experiment to determine whether the electrical stimulation results from effects on the movement per se, or whether the effects result from alterations in spatial memory abilities. Our results, soon to appear in the Journal of Neurophysiology, are consistent with a role for the nigra in spatial memory. These results have important implications for a clinical phenomenon seen in patients with Parkinson’s disease calledparadoxical movement. The results also provide the basis for our overarching hypothesis: the basal ganglia play a role in representing prior information (memory) for decision-making.

We also performed simultaneous recording of superior colliculus neurons and electrical stimulation of the nigra to determine the cause of the behavioral changes (Liu and Basso, 2008). The nigra has a short lasting, profound inhibition of superior colliculus neurons bilaterally. In addition to providing us with a tractable model system to explore how a popular clinical therapy works, the results of our experiments provide us with a solid foundation to expand our decision work into the basal ganglia. Moving forward, we plan to extend this work to explore the combined roles of the frontal eye field and the colliculus as well as the lateral intraparietal area and the colliculus in decision-making under conditions of sensory uncertainty and with manipulations of prior (memory) information.

Linking Cellular and Cognitive Neuroscience: An in vitro Model of Decision-Making

Because the results of our experiments are leading us more and more into questions related to problems of local circuitry, I realized that we needed to expand our range of techniques to includeinvitrowork. In particular, because our stimulation results in the monkey showed that the nigra can influence saccadic eye movements in all directions, we believe the entire superior colliculus map is affected by alterations in basal ganglia activity. We began collaborating with Dr. Meyer Jackson in the Department of Neuroscience at the University of Wisconsin Madison. We are performing voltage imaging and whole cell patch clamp experiments in rodent superior colliculus slices. Because much of the circuitry of the colliculus is conserved evolutionarily, the rodent is a superb model of the monkey colliculus. We also began patch clamp recording experiments to complement our population level studies with single neuron studies. These powerful biophysical tools will provide important insights into the underlying cellular basis for decision-making. figure 2Our in vitro experiments are driven by the results of our non-human primate work and provide an important complement to that work (Vokoun et al., 2010). An example of more recent findings using this approach is shown in the figure on the left.

In this experiment we identified for the first time, an excitatory pathway from the intermediate layers of the superior colliculus to the superficial layers. Seminal work in the superior colliculus showed that when monkeys made saccadic eye movements to visual targets, the visual response of neurons in the superficial layers was enhanced compared to when monkeys saw the same visual stimulus but remained fixating elsewhere (Goldberg and Wurtz, 1972). Enhancement is thought to underlie selective visual attention. As such, a pathway from deeper eye movement regions of the colliculus was proposed to target the upper layers of the colliculus and modulate the visual responsiveness of these neurons (Mohler and Wurtz, 1976). Traditional anatomical methods are insufficiently sensitive to reveal this pathway, and single neuron patch clamp experiments have been too specific to reveal the pathway. By using electrical current to release glutamate into the deep layers of the colliculus slice combined with voltage imaging of population responses, we found an activation of the neurons in the upper layers. The activation was blocked by bath application of a glutamate receptor blocker (Kyenuric acid), and it was absent when the electrode polarity was revered. This latter method resulted in the same intensity of current released from the electrode but no release of glutamate. By bridging the gap between cellular and systems neuroscience with experiments like these, we are hopeful that our work will shed light on the cellular basis of higher mental function. Ultimately we hope to provide critical information leading to rational approaches for extending molecular and genetic techniques from invertebrates and lower mammals into non-human primates.

In net, I am committed to maintaining a strong research program focused on basic science questions that have direct clinical importance and growing my research program in a strong, neuroscience community to achieve these goals.